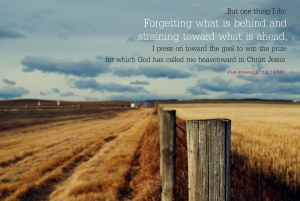 It spoke to me as I strolled down the check out aisle of Marshalls that day. The wall art that was featured on an impulse-buy rack.

The message? Simple: “Don’t Stumble On Things That Are Behind You.”

My mind reeled, and I thought hard about this seemingly simple directive that points to a habit that trips so many of us up: looking back. Allowing the past to deter and diminish our present and our future.

The Apostle Paul had a difficult past to contend with. His early years were spent learning laws and tormenting Christ followers. Then he met Jesus and everything changed for him. He chose to move forward as the new man he’d become.

Instead of wallowing in the muck of condemnation, he stepped into the grace of Christ with determination. With a fresh mission. He wrote a heart-felt message similar to the wall art in his New Testament letter to the believers in the church of Philippi. That familiar, challenging passage…

I want to know Christ—yes, to know the power of his resurrection and participation in his sufferings, becoming like him in his death, and so, somehow, attaining to the resurrection from the dead. Not that I have already obtained all this, or have already arrived at my goal, but I press on to take hold of that for which Christ Jesus took hold of me. Brothers and sisters, I do not consider myself yet to have taken hold of it. But one thing I do: Forgetting what is behind and straining toward what is ahead, I press on toward the goal to win the prize for which God has called me heavenward in Christ Jesus. (Philippians 3:10-14, NIV)

Many of us know this section of scripture, but it’s important for us to realize that the conversation doesn’t end there. What Paul says next is a game-changing statement:

Let those of us who are mature think this way, and if in anything you think otherwise, God will reveal that also to you. Only let us hold true to what we have attained. (Philippians 3:15-16, ESV)

I want to be mature. I want to think this way. Don’t you?

I want to hold true to what I’ve attained in Christ.

It’s the way of life!

I read this and I begin to realize that what Paul is really saying is something to this effect: Let it go, people! Move on. Greater things await you. Don’t look back. It’s no good for you. You won’t gain any traction on the plans that God has for you. If you choose to look back then you need to grow up because that is not where your promise lies. If you are mature in your faith you will believe the gospel. When you are forgiven … You. Are. Forgiven. Believe it. What Jesus did for you and me covers anything that we lay at His feet. Fully.

Clearly this press-on message is not about sweeping un-confessed sins under a rug and pretending they don’t exist. When we stumble – when we sin – we can’t just forget it and move on. We are to confess it to the Lord, and ask Him for forgiveness.

Grace meets us in the asking and settles it with God.Because of this we can move forward in His grace. Even when life is complicated and messy.

And it’s not about locking deep heart wounds in a secret compartment of your heart. The Bible invites us to take our aching, angry, abused, or offended hearts to Jesus so that He can give us the rest we long for. Healing for our heart wounds.

The reward of faith is freedom in Christ.

The past has no hold on you.

Grace fixes the gaze of the believer forward.

So the next time I’m tempted to look back at a failure or an old heart wound, I will remember the wall art wisdom from Marshalls and choose not to beat myself up, not to re-hash that painful conversation, not to blame that person … not to stumble on things that are behind me.

And in the reaching I begin to take my place among the mature-in-faith.

Have a blessed day!