“A capable, intelligent and virtuous woman, who is he who can find her? She is far more precious than jewels, and her value is far above rubies or pearls,” ~ Proverbs 31:10

I just got back from seeing the 9/11 Memorial. I don’t think I’ll ever be the same.

After the horrific events of that devastating day, President George W. Bush appointed the new cabinet position of Homeland Security. It is defined as the deterrence, prevention, and preemption of, and defense against, aggression targeted at United States territory, sovereignty, population, and infrastructure as well as the management of the consequences of such aggression and other domestic emergencies.

In a speech on July 16, 2002, in the Rose Garden, he explained how Homeland Security would deal with the threats of the 21st century in our country. “Our unity is a great weapon in the fight. And by acting together to create a new and single Department of Homeland Security we’ll be sending the world a signal that the Congress and the administration will work together to protect the American people and to win the war on terror.”

As I read President Bush’s description of homeland security and the perilous dangers that threaten our country, I was reminded of the danger that threatens our homes as well. There is a war going on to destroy the God-ordained institution of marriage in this country and around the world. Interestingly, Webster’s dictionary defines marriage as “the institution under which a man and a woman become legally united on a permanent basis.” Almost every word of that definition is under attack today. We need our own “homeland security” to establish the deterrence, prevention, and preemptions of, and defense against, aggression targeted against our marriages.

For a man to guard his heart usually means he must guard his eyes. For a woman to guard her heart, it means she must guard her emotions. “My coworker really listens to me,” Barbara mused. “My friend, Peter, truly cares about my problems,” Clare reflected. “Bob at the post office likes me in this red sweater,” Mary pondered. Each of these thoughts sets off the “homeland security alarm.” Homeland security begins in our own hearts.

Homeland security also means that we work to protect our families.

The Proverbs 31 woman has represented an ideal for women throughout the ages. While she intimidates some, all would agree she is a role model worth emulating. Scripture describes her as smart, skillful, thrifty, and strong. She’s a good cook, a savvy money manager, a contributor to the community, an entrepreneur, a seamstress, a blessed mother, a faithful friend, a loyal wife, and a devotee of God.

As Proverbs 31:10 states, “An excellent wife, who can find? For her worth is far above jewels.” The New International Version calls her “a wife of noble character.” But I personally like the Amplified version that describes her as “a capable, intelligent, and virtuous woman.” The Hebrew word that’s translated “excellent” or “virtuous” can also mean “wealthy, prosperous, valiant, boldly courageous, powerful, mighty warrior.

She fights Satan on her knees in prayer, she fights her hectic schedule to keep her priorities in proper perspective, and she fights to guard her heart against ungodly influences of the society in which she lives.

In verse 27, we see that the Proverbs 31 woman “watches over the ways of her household,” or as another translation states, “she carefully watches all that goes on in her household” (NLT). The phrase “watch over” means to “hedge about as with thorns,” much as a mother bird might protect her young with the thorny rim of a nest. These same words are also used in the Bible as a military term, such as to watch over a city.

I envision the wife of noble character walking around the wall fortifying her home, fully equipped to take on any enemy that threatens to invade her marriage. But lest we imagine the enemy is always some outside force, I believe the greatest enemy can be what happens in our own hearts and minds.

Homeland security? I believe it begins in our very own hearts and homes. 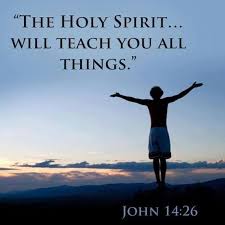 Thank you Sharon Jaynes and Girlfriends in God for today’s message:

“But the Advocate, the Holy Spirit, whom the Father will send in my name, will teach you all things and will remind you of everything I have said to you” ~ John 14:26

“Steve, who are those men with the video cameras and why are they recording the game?” I asked my husband.

“The guy in the opposing stand is from the team that we’ll be playing next week,” he explained. “He is recording the game to study our weaknesses, so our opponents will know where to attack and defeat us. The man on our side is recording the game also looking for weakness, but for a different reason. He will show our team their weaknesses so they can learn from them and improve . . . to make them better. Same video. Different purposes.”

Ah, a sudden glory moment. I don’t know much about sports, but I do know a bit about how the enemy works. He records the video of our lives and looks for our weakness to bring us down—to plan his attack, to defeat us.

The Bible has many names for that enemy: Satan, the great serpent, the deceiver, and the devil. But the most telling name is found in Revelation 12:10: the accuser who accuses believers before God day and night.

Some say that the devil’s main role is tempting mankind to sin. But I believe what trumps even temptation is his role as the accuser who shackles us with shame and condemnation once we succumb to the temptation. He paces before God saying, “She did this and she did that.” He plays and replays the video in the theater of your mind, pointing out all your faults and weaknesses to bring you down. He is AGAINST you.

But remember, there were two men creating a video of Steven’s game. Just as the accuser is against you, there is someone else who is for you. Before Jesus went to the cross, He assured His followers that He would not leave them as orphans. He promised to send the Spirit who would encourage, enlighten, empower, and intercede for all believers. And then Jesus gave the Spirit a name: the Advocate. “But the Advocate, the Holy Spirit, whom the Father will send in my name, will teach you all things and will remind you of everything I have said to you” (John 14:26).

An advocate is someone who is for you and acts on your behalf. Yes! He is for you! And one of the ways that He is for you is to convict you of sin—of something that you have done that is contrary to the ways of God. God will never reveal a weakness, a sin, or a flaw in your life just for the sake of exposing it. He always reveals a deficit because it’s time to make it right—to conform you to the image of His Son. The Holy Spirit awakens your senses to an area of your life that you need to change, and then helps you do it. He shows you the video and says, “Right there. See that move. Let’s work on that area and improve your game.”

Today’s message is from Encouragement for Today and Lysa TerKeurst

Most days, I wake up fairly happy. It’s not like I wake up in the mood for a party, but generally I’m not grumpy when I arise. I wake up and things seem pretty good, level and fresh with possibilities. But then inevitably something — or someone — will bump into my happy. 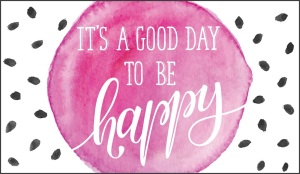 An early morning meltdown by one of my people.

Or a difficult email that makes my heart sink.

Or me underestimating my time and suddenly everything is rushed, hurried and stressful.

Or my husband, Art, lowering the thermostat in the house to 68 degrees and I can’t stop shivering until the temperature hovers closer to 72. It’s amazing how much difference four degrees makes.

Things happen. Things that bump into my happy. And suddenly I’m a little off-kilter and a little less nice.

Well, I’m learning something about a little mental perspective I need to have when things bump into my happy. In that moment, Satan is scheming to have me help him out. If he can just get me jostled to the point where I react out of anger, it’s like lighting a spark near a puddle of gasoline.

Even the smallest spark can ignite quite a fire. A fire that can spread and feel much bigger than what the situation ever should have been.

Take the temperature situation, for example.

It should be just a simple discussion about the thermostat. But, add a little anger and suddenly things in my brain escalate to the point where I’ve just about convinced myself Art is completely insensitive and couldn’t care less about me.

Is that true? Of course not. He just likes to sit in his house without sweating. Surely, we could find a compromise with the temperature or I could go put on some socks and a sweatshirt.

Instead, when he bumps into my happy, a “growth opportunity” ensues that leaves us both feeling a little burned.

In other words, I play right into Satan’s scheme and help him out. Remember, Satan’s plan is to cause separation. Be it a temperature issue, tight finances, a misunderstood statement or one of the millions of little things that can bump into our happy … we have a choice.

We can choose to play into Satan’s schemes and enable his attempts to separate us from God’s best. Or, we can choose to fight for our relationships and against Satan’s divisive attempts. When I think about it in these terms, it helps me identify the real enemy.

My real enemy isn’t any of the people who bump my happy. My real enemy is the one who tries with all his might to get me to jump into a grumpy mood and help him tear down all that I love.

Knowing I need a strategy against these attacks, I turn to the wisdom found in Ephesians 6:11, “Put on the full armor of God, so that you can take your stand against the devil’s schemes.”

You better back up and back off, Satan. I’m onto your schemes. You are the real enemy, not my people. And now I have a totally new game plan for when my happy gets bumped.

Starting with finding just the right pair of socks and a sweatshirt to wear in the ice cave.